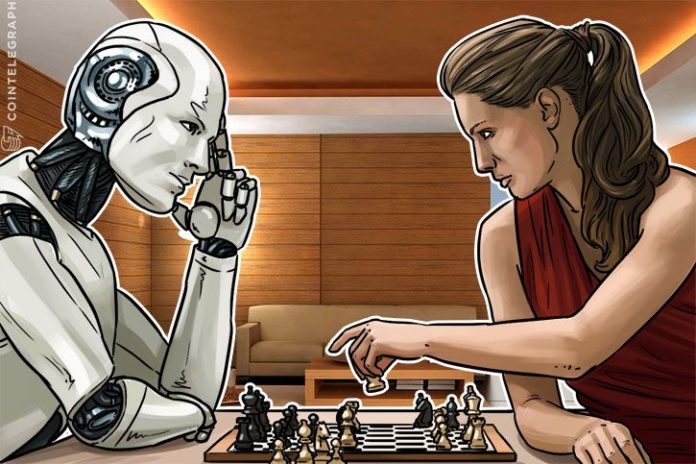 Science fiction and popular culture have long been consumed with the idea of man versus machine. Early on, alarmists worried that machines would take over from mankind, rending humanity obsolete. Others theorized that the running of society would be left to machines, thus leaving people free to enjoy various pursuits at their leisure.

These feelings have intensified as computers have become more powerful and artificial intelligence has become increasingly dominant in fields such as finance. Yet a curious phenomenon has occurred as man and machine are now starting to work together instead of against each other.

Artificial intelligence has been a boon in many fields, especially science and finance, as it is equipped to handle huge amounts of data with many different variables. AI has a lot of positives going for it, such as removing sentiment from data observation and not being affected by individual biases that naturally occur with any living person.

Yet there are limitations to AI as well. While people can exhibit tangible constructs like reason and logic, they can also manifest intangible assets that are highly desirable. Experience, creativity and intuition are all valuable resources that don’t neatly fit in with the cold logic of an AI’s algorithm.

This is where the hybrid intelligence of applications such as Cindicator seeks to improve upon the AI-only algorithms of the past by marrying it with the consensus of the mental assets of a large collective of individuals.

Studies have shown that an answer derived from a large sampling of individuals is often staggeringly true. While a number of people may be off the mark with their answers, this difference is smoothed away to practically nothing when combined into a collective whole.

Scientists have realized the vast potential of thousands, or tens of thousands, of people working on a singular problem. A perfect example of this is where thousands of gamers helped solve the issue of the structure of an enzyme that causes a disease similar to AIDS in monkeys.

Scientists had spent 13 years trying to figure out the molecular puzzle, but they then decided to open it up to gamers by creating a game that allowed players to manipulate molecular structures.

The gamers solved the problem in three weeks. Seth Cooper, a computer scientist and developer, stated:

“People have spatial reasoning skills, something computers are not yet good at. Games provide a framework for bringing together the strengths of computers and humans.”

Such projects show the massive potential of an individual’s mental assets. Multiply those assets by up to millions of other individuals, and the results are staggering.

Applications like Cindicator are tapping into these mental assets and forging them with artificial intelligence to take a huge leap forward in detecting trends and creating forecasts. Each person has their own unique perspective and experiences that they can bring to bear when looking at an issue.

Man and Machine, not versus

Problems are broken down more easily when attacked from several fronts. People can look to solve a problem by using their hard-earned experience while others may count on their intuition. Some may think outside-the-box and come up with a creative solution.

These singular approaches are all manifestations of mental assets, but the true breakthrough is combining the mental assets of many individuals together as the problem is then besieged on multiple fronts.

One of the most important factors of using mental assets is creating as large a sampling size (or data pool) as possible. A larger collective sampling size is important for several reasons.

First is the fact, as mentioned before, that the larger the collective, the greater the overall accuracy. Another reason is that biases are removed by increasing the size of the data pool of people.

This can be clearly seen in the enzyme problem. The scientists working on it represented a very small sample size, and their individual bias was compounded by them being a small, insular group.

By contrast, the gamers came from all walks of life and backgrounds. Their individual bias was rendered moot by the fact that several hundred thousand of them were all working on the project.

This merging of both human experience and computer AI is why many are excited about the Cindicator application. Its ICO is scheduled to begin September 12, during which 100 percent of its tokens (CND) will be issued. Token holders will be able to use Cindicator to have full and exclusive access to a technological and analytical infrastructure based upon a hybrid intelligence network.

This access allows token holders to examine indicators of traditional markets and crypto-markets (the probability of rising or falling asset prices, indicators of significant events impacting the market, etc.), use auxiliary service products for trading (such as Telegram and Slack bots), view market indices and sentiments generated by hybrid intelligence, and the use of various analytical products (ICO ratings, investor portfolio analysis, etc.).

Computers can bring a lot of raw power to bear, but the human mind is also capable of bringing its own firepower as well. Mankind has always sought to tap powerful resources over the course of its existence, such as fire, oil, machines, and now computers. It stands to reason to also tap into the human potential, manifested via mental assets, as well.

Each individual human being brings a lifetime of knowledge and experience when working to solve a task. This outpouring of resources is magnified tremendously as the individual contributions are gathered into a collective whole that comprises the work of tens, or even hundreds of thousands of people.

The awe-inspiring reality is that the mental assets that every person possesses is now a vital resource that is pushing hybrid intelligence to heights far above those capable by AI alone.