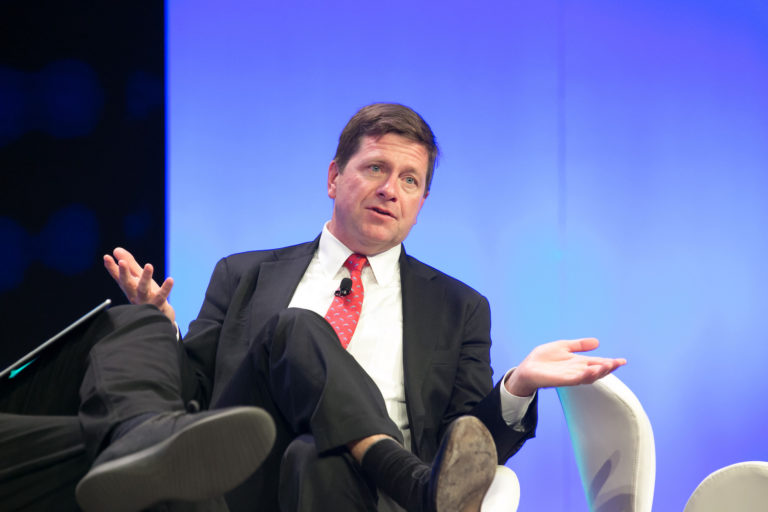 U.S. Securities and Exchange Commission (SEC) Chairman Jay Clayton may be the next U.S. Attorney for the Southern District of New York.

According to a Department of Justice press release published late Friday, Clayton has been nominated by U.S. President Donald Trump to helm the prosecutor’s office, three years after he first took on the role as chairman of the nation’s top securities regulator. Clayton’s term as chairman was supposed to have expired in 2021. While the press release said current SDNY U.S. Attorney Geoffrey Berman would be stepping down, he released a statement late Friday

“I have not resigned, and have no intention of resigning, my position, to which I was appointed by the Judges of the United States District Court for the Southern District of New York,” Berman said in a statement.

In a statement attributed to Attorney General William Barr, the DOJ announced that U.S. Attorney for New Jersey Craig Carpenito will serve in the Southern District role in an interim basis, starting July 3, until Clayton is confirmed by the U.S. Senate.

According to Stephen Vladeck, the A. Dalton Cross Professor in Law at the University of Texas School of Law, it is possible Berman can continue serving until Clayton is confirmed.

The statement did not indicate who might replace Clayton as head of the SEC.

“For the past three years, Jay has been an extraordinarily successful SEC Chairman, overseeing efforts to modernize regulation of the capital markets, protect Main Street investors, enhance American competitiveness, and address challenges ranging from cybersecurity issues to the COVID-19 pandemic,” Barr said in his statement, adding:

“His management experience and expertise in financial regulation give him an ideal background to lead the United States Attorney’s Office for the Southern District of New York, and he will be a worthy successor to the many historic figures who have held that post.”

As SEC chair, Clayton oversaw the regulator during the peak of the initial coin offering bubble and much of the aftermath. At various events he has discussed the agency’s approach to the crypto space, including raising questions about the bitcoin market’s ability to be manipulated, size and custody solutions.

SDNY has also been active in the crypto space, bringing a number of cases against allegedly fraudulent crypto projects. Unlike his predecessors at SDNY, Clayton is not a prosecutor, said Politico reporter Zachary Warmbrodt.

Commissioners Elad Roisman and Allison Herren Lee are the other two members of the SEC.