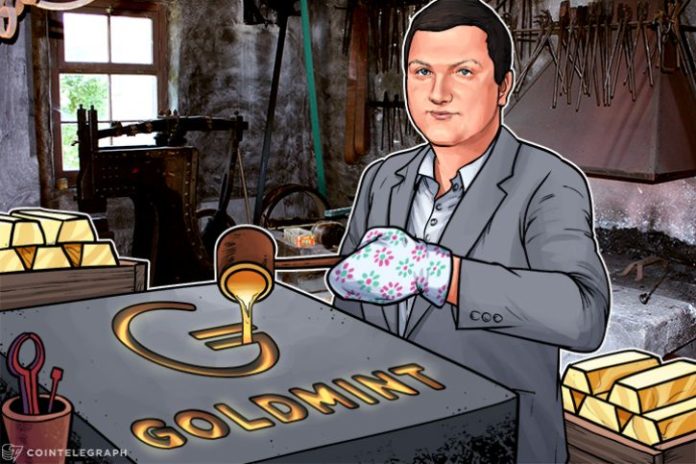 Dmitry Pluschevsky, Moscow, Russia-based CEO and Founder of GoldMint, is known for his work in the arena of mobile gaming and for bringing transformation to how the pawn business operates in Russia. He made significant contributions to the development of LOT-ZOLOTO, which helps pawnshops monetise unclaimed gold assets.

LOT-ZOLOTO is highly successful and receives revenues of over ₽500 mln per month, and converts more than 450 kg of 585-carat gold monthly. We talked with Dmitry about his foray into bringing gold to the cryptoworld, and how he hopes to reshape the cryptocurrency landscape with the upcoming ICO.

Gold is a favoured investment for many across the globe. It is universally valued and has its own fan following. Many investment experts believe gold to be a hedge against inflation, and there are adherents who buy it as the only ‘real currency’.

GoldMint now plans to launch a crypto asset, which is named GOLD and will be backed by the real commodity itself. Exchange Traded Funds (ETFs) and physical gold would be used to guarantee GOLD’s equivalency, with assets purchased and sold keeping in mind value of the upcoming cryptocurrency.

In an exclusive interview with Cointelegraph, Dmitry Pluschevsky talks about gold as the choice of asset:

“It is a clear metal for general public. In addition, we have a company that buys 450 kg of gold per month from pawnshops all over Russia. These are unclaimed deposits. Therefore, we have our own source of gold – we don’t depend on banks.”

It took Dmitry over an year to conceive the idea of GoldMint as it stands today. In July 2016, he started a project called LOT-ZOLOTO, which laid the foundation of transforming the pawnshop market by purchasing unclaimed deposits. The tokenisation of gold was the next logical step for Dmitry.

“The idea of ​​GoldMint reached my mind when I worked as a director of a venture fund in Russia, and was looking for niches for a new business.”

There are three aspects GoldMint is based on:

Custody Bot is a really exciting product which promises to make the storage and tokenisation of gold automated. The machine is connected to a private Graphene-based Blockchain, and can handle jewelry as well as coins.

The key elements of Custody Bot include a spectrometer and a balance, it will be driven by a computer that runs on Linux. A new era of transparency can be ushered into how gold is handled due to this device.

It certainly can be a gamechanger and as Dmitry explains:

“Custody Bot really changes the whole pawnshop industry. After five years, we plan that Custody Bot will be installed in each shopping mall and getting loans to card will go on bail. It will be a new economy – the economy of trust. In the future, we are going to equip the Custody Bot with a section that will sell gold. This way, if you have cash you receive gold. No cash – you can sale or lay gold.”

So what about security? GoldMint have it all figured out and Dmitry is quite sure that it will go smoothly:

“At first, Custody Bot will only be installed in pawnshops. Later, when the quality of its work will increase, we are planning to install Custody Bot in malls. It’s as safe as installing an ATM machine. Everything will be insured.”

The pre-ICO in June 2017 has already raised over $600k in less than 36 hours. Now GoldMint is heading for the main crowdsale which will be launched on Sept. 20.

Technical token MNT will be put on sale, which will give opportunities to validate blocks with GOLD and be rewarded. The ICO for GoldMint is an opportunity for investors to back the tokenisation of gold.

We asked Dmitry to share the roadmap of the project’s near future and he laid it out:

“After completing the crowdsale we will start developing our Blockchain. Next spring we are going to put GOLD in rotation. Around next autumn, Custody Bot will be released and we will get on American exchanges since our token is not a security.”

The details of the ICO and technical information related to GoldMint have been released in a whitepaper.

We give liquidity to metal

So what can GoldMint do for the world? Will a gold-based token be a de-facto currency some day?

These are important questions that we posed to Dmitry. He told us that he is excited about the stability and the trust of traditional investments that GoldMint is bringing to the world of cryptocurrency.

He is also excited about Custody Bot, which he thinks will allow people to get loans using gold as a collateral, savings time and money. In a way, GoldMint will add liquidity to an asset, which is difficult to cash in the real world.

As for the role that cryptocurrency backed by gold can play, Dmitry says:

“It will be a great alternative for keeping funds. I don’t think it will replace real money.”