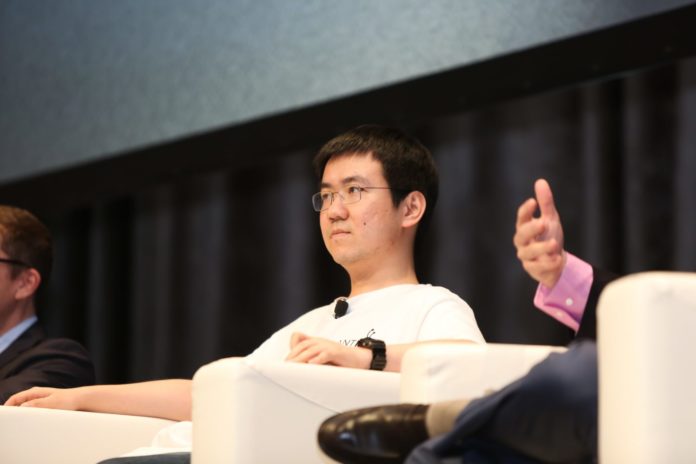 The ongoing battle between the co-founders at Bitmain has now essentially hard forked the world’s largest bitcoin miner manufacturer into two different operations and supply chains for making its flagship AntMiner equipment.

Wu Jihan, the co-founder who ousted his rival co-founder Micree Zhan Ketuan last year, registered a new entity on July 16 in Shenzhen, China. The new entity, called Guiji Yanghang, is a subsidiary of another recently incorporated company named Beijing Guiyuan Dalu, which is controlled by Wu’s side.

Wu removed Zhan from Beijing Bitmain in October, following a long-time power struggle between the two. But Zhan made his comeback in June to control the entity again after winning favor from authorities earlier this year.

One person familiar with Wu’s plan who wasn’t authorized to speak, said the new Shenzhen entity is to build out a separate supply chain and manufacturing process for making the AntMiner product. This is a countermove to Zhan also taking over Beijing Bitmain’s long-time Shenzhen factory after his return to power last month.

Bitmain, which raised more than $700 million in 2018, was once the most-valued crypto startup in the world at a staggering $14.5 billion valuation. But its dominance in the crypto mining industry has been seriously eroded by competitors since last year amid its internal power fight for control of the company.

Wu’s move is the latest twist in a power struggle that could create greater confusion for global customers buying the firm’s equipment. It might be unclear, for example, which side would own the AntMiner brand, its shipment logistics and the post-sale services.

In an internal letter last Friday, Wu explained to all staff at Bitmain again that he had to return last year to take the reins in order to save Bitmain from a cash flow shortage of several hundred million dollars, allegedly caused by Zhan.

Wu added in the letter that he has initiated an alternative supply chain plan to substitute the role of the existing Shenzhen factory that’s affecting the firm’s product shipment.

The official WeChat account of the AntMiner brand maintained by Wu’s side published a notice on Monday, apologizing to customers that shipments that were already due by the end of June will be delayed again, citing “external disruption to the company’s management recently.”

Further, with Zhan having rehired Bill Zhu, the head of sales at Bitmain who was let go after Wu’s coup last year, the two sides now also maintain their own sales staff.

“The next phase of the dispute could focus on the chip ownership [of AntMiner],” the person said.

After being pushed out last October, Zhan, as the largest shareholder of Bitmain, made his way back on June 3 after winning favor from Chinese authorities. In early May, authorities granted him control of Beijing Bitmain Technology, the long-standing operational entity of Bitmain.

In a countermove, Wu registered the Beijing Guiyuan Dalu on May 26 and had been trying to transfer the contracts of employees on his side to the new entity.

Following his return, Zhan also took over Beijing Bitmain’s Shenzhen factory called Century Cloud Core, where his brother-in-law remains the person in charge, and withheld miner shipments for customers who paid their pre-orders to bank accounts controlled by Wu’s side.

A second person with knowledge of Bitmain’s internal situation said the Shenzhen factory issue caused pressure for Wu from customers whose shipment was due. As such, creating a separate new line of supply chain and production is a method attempting to resolve the supply chain situation.

But it’s unclear at this stage how soon production can begin as Wu would need to persuade technical staff with knowledge of handling the integrated circuit process to come over to his side. Most of them had been working closely with Zhan, the person added.

Public records show that an effective AntMiner trademark has at least been registered in mainland China and Hong Kong, both filed and owned by Bitmain’s Singapore entity called Bitmaintech Pte.

Intriguingly, the same Singapore entity filed a new application for a trademark named “Bitmain Antrack” on June 5, two days after Zhan’s return. But product details relating to this trademark aren’t clear at this stage.

Bitmaintech Pte is in parallel with Bitmain Technologies Limited, which is registered in Hong Kong. The two are both direct subsidiaries of BitMain Technologies Holding, the ultimate parent holding group incorporated in the Cayman Islands that controls all Bitmain entities.

Read more: How Was It Possible for Bitmain to Oust Its Largest Shareholder Overnight?

But as of July 2, a corporate filing of Bitmain Technologies Limited with the Hong Kong government shows that Wu was still the sole executive director at the Hong Kong entity’s board.

The two sides have an ongoing legal battle in the Cayman Islands. The legal decision could mark an end to their internal fight as it will rule on whether Zhan still has the dominant voting power over all issues at Bitmain’s parent holding group.