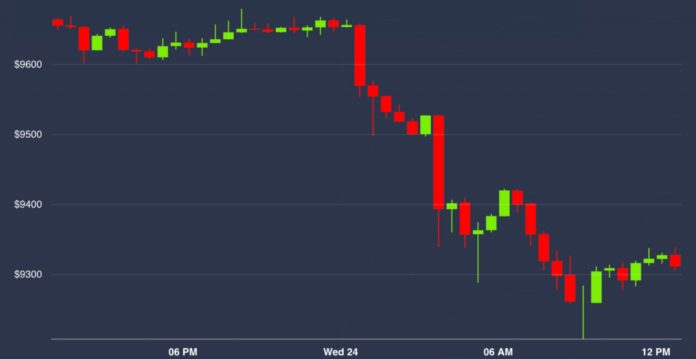 Bitcoin started the week with a bullish run, but it has now given back all of those gains.

Bearish sentiment is affecting all markets today as investors appear to be de-risking, selling liquid assets for the safety of instruments like cash, said Neil Van Huis, director of institutional trading at liquidity provider Blockfills. “Looks a little risk-offish on all risk assets across the board,”

Read More: Miners Are Sending Bitcoins to Exchanges Again – And That May Be Bearish

Indeed, major stock indices are all in the red Wednesday. In Asia, the Nikkei 225 of publicly traded companies ended the day flat, down 0.07%. Concern about increased coronavirus infection rates in Japan led to some selling pressure. In Europe, the FTSE 100 index dropped 3.1% Wednesday. The prospect of U.S. tariffs on U.K., French, Spanish and German goods dragged the index lower.

The U.S. S&P 500 stock index lost 2.6%. The round of stock selling has been attributed to concerns of the coronavirus pandemic’s resurgence in some states.

June hasn’t exactly been a winner for bitcoin so far, but it’s not like stocks were hot either.

As bitcoin dropped Wednesday, traders with long positions on Seychelles-based derivatives exchange BitMEX were forced to liquidate. A spike of over $19 million in total liquidations occurred at 10:00 UTC (6 a.m. ET), exacerbating bitcoin’s price fall. Over the past 24 hours, total liquidations on BitMEX heavily skewed towards the red, with $33 million in sell liquidations versus a mere $406,000 in buy liquidations.

Liquidations on BitMEX are the equivalent of margin calls on conventional exchanges. A “buy liquidation” on a bitcoin contract is when a losing short position is forced to close, requiring purchases of bitcoin. When a “sell liquidation” occurs, those long bitcoin are forced to sell.

“It looks like someone was liquidating positions ahead of the Friday, June 26 option expiration – lifting hedges above $10,000-$11,000 as this is where the heavy portion of strikes lie,” said David Lifchitz, managing partner of ExoAlpha, a crypto quantitative trading firm.

In fact, strikes do favor bitcoin prices over $9,900, according to Skew data, as options traders appear to be making moonshot bets on the world’s oldest cryptocurrency skyrocketing.

The promising growth of the crypto options market is giving traders other alternatives than spot, as that market is closing in on $2 billion in open interest.

Thus, traders can play bitcoin’s volatility through options without having to take on a spot position. “I believe crypto is still somewhat correlated to risk assets and there hasn’t been a ton of overwhelming buy side demand in crypto lately,” Blockfills’ Van Huis said.

Trading of the U.S. dollar coin-tether (USDC/USDT) pair on Ethereum’s decentralized exchanges, or DEXes, jumped in June, according to data from Dune Analytics. For the week of June 8, USDC/USDT trading volume was a paltry $3.5 million. The next week, June 15, that number climbed to $131 million in volume.

Speculation on the lender Compound’s token COMP and the arbitrage opportunities surrounding it is the reason for the increase and in USDC/USDT on DEXes, said Peter Chen, a quantitative trader for Hong Kong-based OneBit Quant. “I believe the market was driven up previously with the FOMO on COMP and it was over-hyped.”

“However, the market didn’t have enough solid support after the COMP frenzy has dropped,” Chen added. Indeed, this past week’s USDC/USDT volume subsided to $10 million, which suggests traders are looking at DeFi opportunities but speculation may ebb and flow based on token popularity.

In commodities, oil is dipping 5% Wednesday as a barrel of crude was priced at $37.97 at press time.

Gold is holding flat during a day where most assets are lower, down just 0.10% and trading around $1,765 for the day.

U.S. Treasury bonds all slipped Wednesday. Yields, which move in the opposite direction as price, down most on the 10-year, in the red 4.5%.